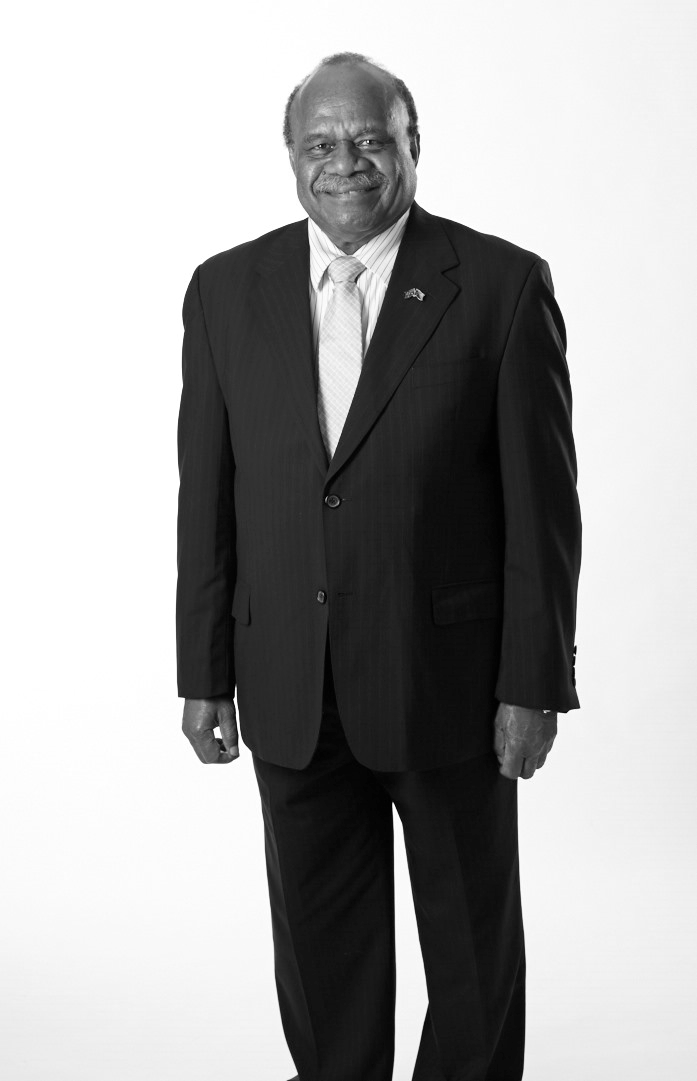 Sir Rabbie Langanai Namaliu served as Foreign Affairs & Immigration Minister in the Government of Papua New Guinea from August 2002 to July 2006 and Minister for Treasury from July 2006 to August 2007. He served briefly as Leader of the Opposition in 1988 before becoming Prime Minister between 1988 -1992 and Speaker of the National Parliament between 1994 -1997. He earlier served as Minister for Foreign Affairs and Trade, 1982-84 and has held several other senior ministries including Primary Industry, and Petroleum and Energy since his first election to Parliament as MP for Kokopo (East New Britain) in 1982.

Sir Rabbie had a distinguished public service career before entering Parliament. He was Chairman of the Public Services Commission from 1976-1979 and earlier served as Principal Private Secretary to the Chief Minister and then first Prime Minister, Sir Michael Somare from 1974-1975 and in 1976 he served as East New Britain Provincial Commissioner.

Sir Rabbie was Chancellor of the PNG University of Natural Resources and Environment, based at Vudal in East New Britain Province from August 2007 to February 2011.

He has been an independent Non-Executive Director of Marengo Mining Limited based in Perth since 11th February 2008 and Chairman of the Board of Directors of the publicly listed investment firm, Kina Asset Management Limited based in Port Moresby since 2008. Early in 2009, he was appointed to the Board of Directors of Kina Securities Limited as an independent Non Executive Director and since December 2011 appointed as Chairman.

He was appointed as an independent Non Executive Director and Chairman of Kramer Ausenco on 16th February, 2010.  Kramer Ausenco is a joint venture comprised of Kramer (PNG) Limited, Kramer Ausenco (Pacific) Pty Ltd and Ausenco of Australia, formed to provide a whole range of engineering services to clients in PNG and in the South West Pacific region as well as globally. Kramer Ausenco has permanent offices in Port Moresby, Brisbane, Honiara, Port Vila, Nuku’alofa, Suva and Apia.

Since March 2011, Sir Rabbie has been an independent Non-Executive Director of Bougainville Copper Limited and as of 1st July, 2011, was appointed by InterOil to it’s PNG Advisory Board.

In 2008, Sir Rabbie Namaliu was appointed by AusAID as a member of the Agricultural Innovation Grants Committee, which is a sub-committee of the Agricultural Research & Development Support Facility (ARDSF) funded by the Australian Government and until early 2009, was Chairman of the Committee. Furthermore in 2008, Sir Rabbie was appointed by AusAID to the Pacific Regional Leadership Program Advisory Committee, (a regional leadership training program covering six countries namely, PNG, Solomon Islands, Vanuatu, Fiji, Tonga and Samoa) of which he is also the Chairman.

Sir Rabbie is a member of PNG Institute of Directors.